Ever been in the passenger seat and had the driver ask you to, “take it off the dashboard”?

Whether it’s your feet or a pack of fries causing the offence, people are particular about what goes up there. It might be about decorum, or the odd aroma of your bare toes, but it’s mostly about safety.

Loose items and feet on the dashboard can distract the driver or slide when the car corners or accelerates. This, in turn, might interfere with the driver’s access to the steering wheel, gear lever or line of vision and could compromise everyone’s safety. To avoid accidents due to misplaced or moving objects, good drivers and great passengers are committed to keeping the dashboard clear. If there’s one thing that you can put there safely, though, it’s the dash cam.

Cars are increasingly fitted with devices that enhance the driving experience. You can mount your phone, install a GPS sat nav, consult a pre-fitted screen and more. The dash cam, or dashboard (video) camera, is a dedicated camera that records the road before it, with select models also capturing what’s behind, and even inside. In some countries, like Russia, it’s a standard requirement for licenced vehicles. In other countries, like South Africa, it’s an optional add-on. It’s not a selfie cam, or the start of your car karaoke streaming career. And while it’s not meant as a sky-gazing tool, the popularity of the device has led to incredible footage like this amazing meteorite swimming through the sky.

A dash cam can, as National Retail Systems Inc. highlights, be useful for “recording attempted break-ins, vandalism, or hit and run incidents” and act as a non-biased witness for legal disputes. It can clarify situations where law and witness testimony appear to clash, like in a rear-end crunch where the back driver claims innocence.  Evidence like this is useful as the driver behind is, by default, responsible for damages and footage can prove if the front driver caused the crash by, say, reversing into the driver behind.

Dash cams are valued for the support they add to a court or claims process, but they have their uses even before this. While an extra pair of digital ‘eyes’ like this does not directly affect the car’s or the driver’s functioning, their mere presence can be positive. That’ because:

Can You Use it for Insurance Claims?

Absolutely. You can submit approved footage to support your claim.  Though it’s important to note that Having one will reduce your monthly premium with us, too, so if your car is covered with dotsure.co.za and you haven’t notified us that you already have dash cam, do so today and start saving. dotsure.co.za policy holders can easily update their cover via the Manage Portal, with a call or a call-back request. If you don’t have cover with us, but you’re curious, we’ll contact you when it suits you to explain the benefits of our cover.

Can dotsure.co.za Insure a Dash Cam?

Definitely. “You would need to have it insured separately as an all-risk item, portable possession or non-standard accessory,” advises, dotsure.co.za Dealer Sales Manager. We can also cover your pets, your home contents and your funeral plan.

Can Footage Be Faked?

It certainly can if a high-level animator slash coder tackles it. The convergence of Artificial Intelligence (AI) and animation means that audio-visual footage can be manipulated or manufactured before, during or after it is created to form alternate versions of truth and reality. It can even be done while it is being broadcast live as this piece from Medium demonstrates. Faked footage – deepfakes – and hacking happen every day, so it’s important to protect internet-connected devices like laptops, and dash cam footage from cybercriminals or suspicion of fraud. Most devices have some form of protection, but these need to be monitored and updated regularly to be effective. Chat to a cybersecurity professional for advice if you’re concerned and find out if the dash cam you’re interested in has Wi-Fi capability. Footage can be accessed even if it doesn’t, if it’s kept on a remote device connected to the internet.

It’s important to be careful with documentary footage because proof goes both ways. “Remember,” warns Lifehacker, “your own dash cam footage can potentially be used in claims against you should you cause a car accident or be caught breaking the law whilst driving.”

Also, laws protect the privacy of people and of places. There may be legal consequences when you publish footage without the necessary permissions.. Individuals may have an automatic right to privacy in certain situations and settings, and if you’re in public, private or restricted zones you must follow the privacy rules for these areas. In a global world with rental cars and dash cams everywhere, surveillance and privacy law may differ across provinces, states, zones and countries. It’s up to you to know what is expected of the car you’re driving and its camera footage.

On a lighter note, if you’re a power-user, you could even employ your dash cam to dispel less serious doubts or differences of opinion like this guy did… 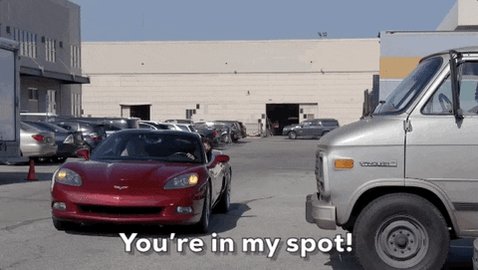 but sometimes it might be easier (and less stressful) to let the other driver have the parking they so desire, and find another, no? 😊